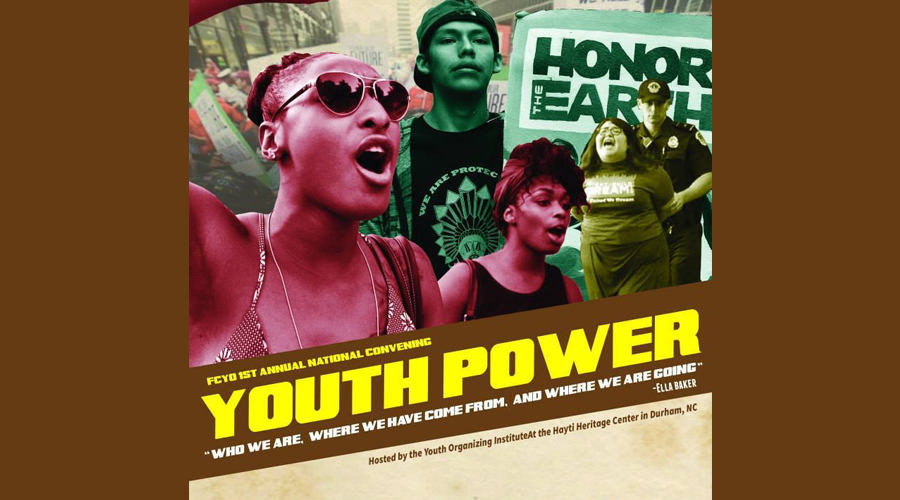 Four Youth Led Social change groups from Connecticut joined their peers from all over the country in Durham, North Carolina this fall for the Funders Collaborative on Youth Organizing’s (FCYO) national convening – Youth Power: Who we are, Where we have come from, and Where we are going. The convening was an opportunity for youth organizers to come together, connect with their history, and share their work with one another.

Youth leaders from Norwalk’s Youth Council for Justice (YC4J), Hartford Food Systems (Grow Hartford), New London’s Hearing Youth Voices, and Connecticut Students for a Dream (based in Stamford) participated in the conference. We spoke with David from YC4J and Omayra from Grow Hartford about their experiences in Durham. 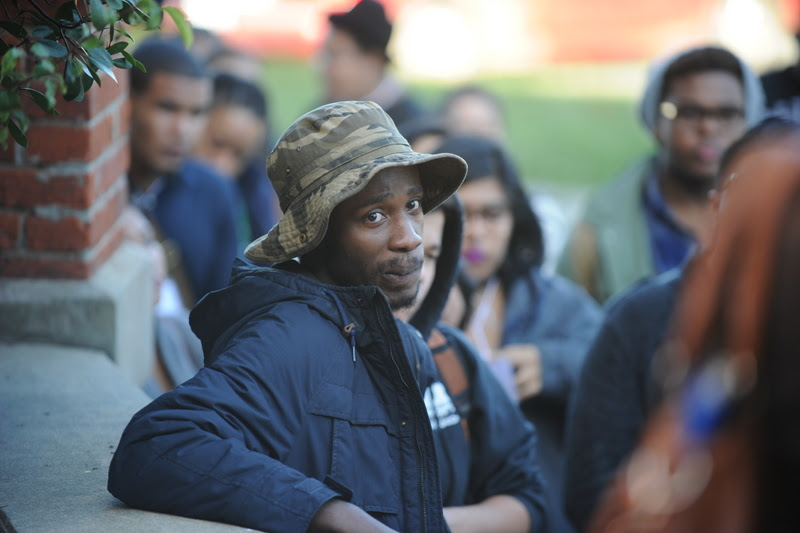 The event took place at the Hayti Heritage Center in Durham 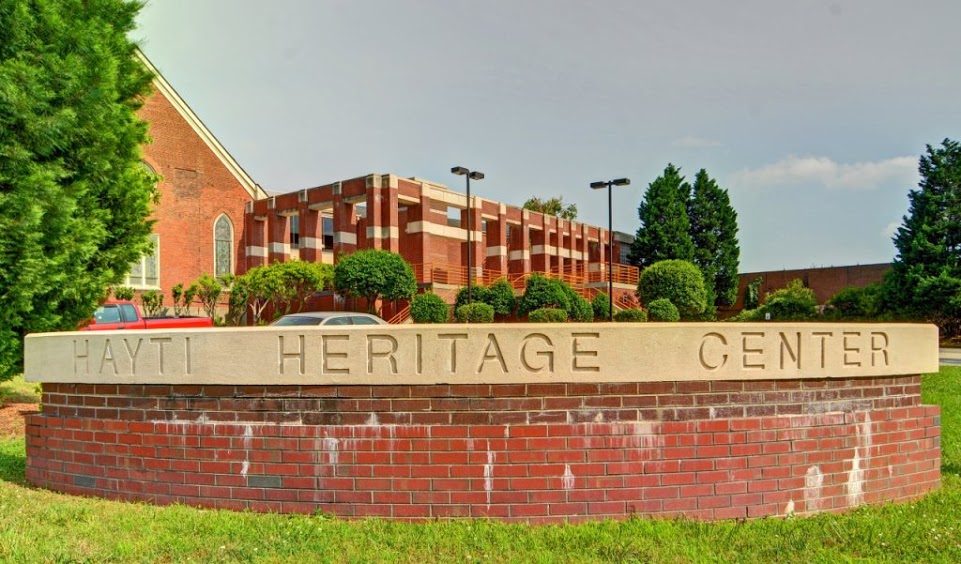 A venue with deep roots in the Black community’s fight for social justice.

Here are ten amazing things young people did together in Durham.

“The seminar session was called ‘I love myself and my people.’ Organizing is strenuous and takes a toll on you. You need to take time to deal with yourself and deal with your emotions before trying to help the world. In the session, the facilitator asked, ‘What will you take away from this experience to help yourself heal?’ My response was that I’m taking this to help my group. She came back and said, ‘how will this help you?’ As organizers we think about the people 24/7 and she challenged me to think about myself.”

#YouthPowerDurham Who gets to define who you are? Whoever writes down the history gets to tell the story .@elpuebloinc

“I gained knowledge about different people who did things in the civil rights movements who usually fall to the background. You always think about MLK and Rosa Parks. We learned about this man, T.O. Jones who organized a union. He worked 50 hours a week but was only paid for 40. He got people to walk off work and while they weren’t working. He raised money for them and he paid them”

Next stop on our learning tour: the beautiful “We Must Remember and Continue to Tell” mural. #YouthPowerDurham pic.twitter.com/KqnSIIjAFs
— Generation Justice (@genjustice) November 13, 2015

“We stopped to see legendary activist Pauline murray’s home. We also saw Black Wall Street after it was taken down. Seeing it as it is now, I’m imagining it as it was then. It looks like a downtown area that’s gentrified.”

3) Young organizers honored those who came before them.

Posted by The Funders’ Collaborative on Youth Organizing – FCYO on Saturday, November 14, 2015

We have nothing to lose but our chains! #YouthPowerDurham #YouthPower2015 pic.twitter.com/0QXp4ej9dY

“We did a lot of chants and a lot of songs that brought everyone together. It’s uplifting. I’d like to bring that back to our group.”

“We must center the work of transwomen & the lives of transwomen in our movement for Black lives.” #YouthPower2015 pic.twitter.com/fYBGNdtPcO

“I went to a trans and queer workshop which was really cool. I learned about what they go through. It was impactful because everyone was created in different ways and should be able to live their lives like they want to without people judging them. I also went to a black girls matter workshop. We talked about some powerful things and created a sister bond.”

6) Young people built a vision for the future.

“We who believe in freedom can’t rest until…” Fill in the […] #youthpower2015 #YouthPowerDurham pic.twitter.com/p4GYRIboBl

Make sure to participate in the quilt poster project! We who believe in Freedom cannot rest until…#youthpower2015 pic.twitter.com/JOA5GRDNXA

Standing in the tradition of and paying tribute to quilting as a act of resistance that contained the freedom dreams of enslaved Africans, youth organizers weaved a quilt “We Who Believe In Freedom” of the freedom dreams of their generation, the Dream Nation. #youthpower2015 #quilting #freedomdreams #freedomfighters #dreamers #dreamdefenders #freedomside #dreamnation #youthorganizing #durhamnc #freetheland #whatassatataughtme #blackwomen #blackwoman #blackorganizing #cultureisaweapon #resistance #liberation

S/o to m @BreeNewsome for coming all of the way to the bull city to inspire our youth. #youthpower2015 pic.twitter.com/jyXcWFgn22

In the wake of the Charleston Massacre, Bree Newsome captivated the world when she courageously scaled a flagpole at the North Carolina statehouse and took down the Confederate flag. 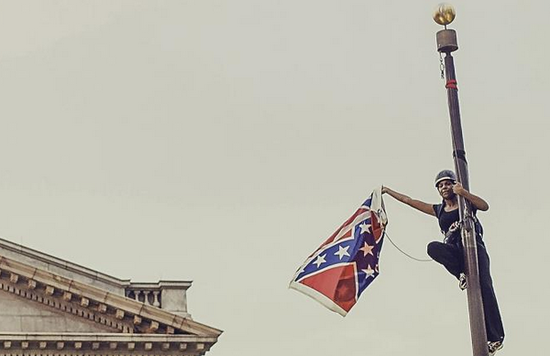 “I removed the flag not only in defiance of those who enslaved my ancestors in the southern United States, but also in defiance of the oppression that continues against black people globally in 2015 . . . I did it for all the fierce black women on the front lines of the movement and for all the little black girls who are watching us. I did it because I am free.”

*Niya watched as her classmate Shakara was violently assaulted by a school resource officer. She was also arrested when she stood up and spoke out in support of the young woman. #Assaultatspringvalleyhigh

One of my favorite moments last week was meeting #niyakenny who stood up for her sister in the Spring Valley Assault. To me, she stands in the legacy of Black women warriors like Rosa, Ella and Assata. The youth of the @4edjustice delivered love letters written by youth organizers from across the country. She got to meet #BreeNewsome. They were each other’s inspiration. May Ella Be Pleased. #youthpower2015 #blackwomen #blackwoman #blackyouth #sayhername #blackgirlsmatter #blackgirlmagic #ellabaker #durhamnc #durham #whatassatataughtme #rosaparks #youthorganizing #endwaronyouth

We are loving the intergenerational movement building panel at #youthpower2015! #YouthPowerDurham pic.twitter.com/QDeB70xHxR

To be truly intergenerational organizations must involve youth across activities, and not just for one off things #youthpower2015
— Tasha Tucker (@tashatuck328) November 13, 2015

“Older people can bring knowledge of things they have experienced. The young can learn from them and go about ways of organizing and what their next steps should be.”

“We love you, we see you!” – Protest in solidarity with Inside-Outside #YouthPower2015 #YouthPowerDurham

Posted by The Funders’ Collaborative on Youth Organizing – FCYO on Friday, November 13, 2015

Posted by The Funders’ Collaborative on Youth Organizing – FCYO on Friday, November 13, 2015