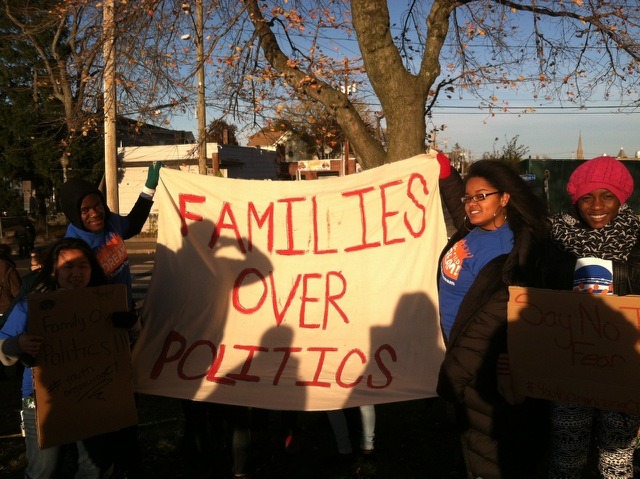 On Sunday, November 2nd Hearing Youth Voices attended a peaceful protest in Bridgeport, CT. They sent out a call asking for other organizations to rally alongside them at an event where President Obama was speaking. DREAMers and their families demanded that President Obama include parents of DREAMers in deportation relief. So we were stood in solidarity with CT Students for a Dream and United We Dream. Being out in the cold for 3 hours is not what people would usually sign up for. However, the thought of making a change with some amazing people for their families was worth the wait. Upon arrival we were greeted by Lucas from C4D. The groups had collectively gathered to get together their strategy and eat. Afterwards we broke off into two groups to be sure that we were seen and heard from every point and perspective. I felt the Dreamers came prepared because they made sure everyone who participated was comfortable. They provided coats, scarves, gloves, hand warmers, pillows, etc. Another good aspect they had at the protest was they had people on the inside where Obama was, making sure we were heard. Overall, the Dreamers did a fantastic job organizing and it was an honor to be part of the wonderful process.