The Evolution of Youth Voice: An Interview with Frank Derico of Neighborhood Studios 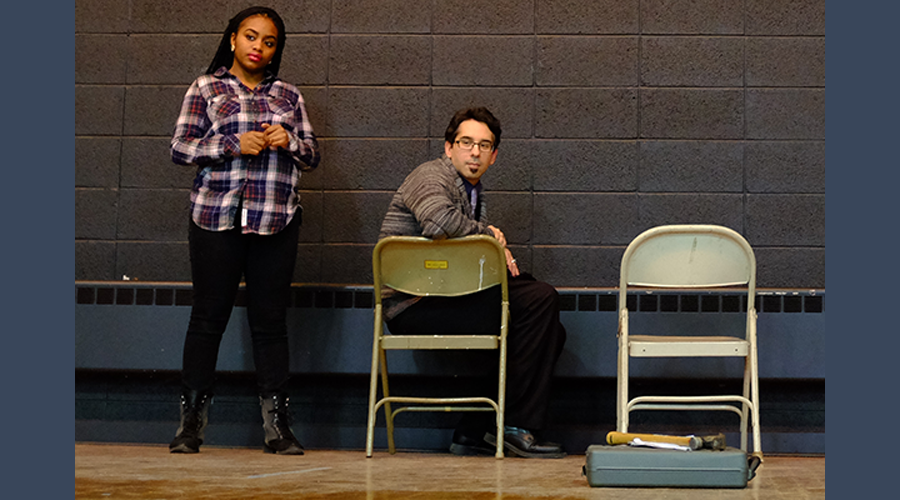 The Perrin Family Foundation has been a supporter of Neighborhood Studios of Fairfield County (NS) since 1997 when the organization was called the Music and Arts Center for Humanity. In the past five years, in partnership with PFF, Neighborhood Studios has moved its core youth programming in a new direction – building youth voice and youth leadership more intentionally into their work.

CSM: How long have you been at NS?

He knew I was looking for a job, and he asked me if I was interested in working at Neighborhood Studios. I said yes and I stuck around and became program coordinator in the summer of 2000.

In that role, I oversaw outreach in Stratford and Westport. After a year, I became program director and managed fourteen school year programs and four camps. I did that for twelve years.

When I became Program Director, Luisa [Guzman] took over conservatory. She has a degree in industrial design.

We went through two Executive Directors and when the last one retired, I was asked to take over. I presented some ideas about the direction that the organization could go in and they decided to hire me as ED 2012.

CSM: What was it like when you started at NS?

FD: I had never actually taught. That was a bit of a shock because I hadn’t been in front of a lot of youth. I was comfortable with it though.

It’s been really fun to learn this work that we do and evolve with it as our students evolve. The work is constantly changing. The youth are always changing and you adapt to their needs.

CSM: When do you remember beginning conversations with Perrin about the foundation moving its work toward Youth Voice and Youth Led Social Change? What was that like?

FD: When I was program director I sat down with Sheila and Kelly.

The foundation started undergoing these changes and moving toward youth voice while they were funding our Ailey Camp program – a program based on a national model developed by Alvin Ailey to boost the young people’s self confidence and feelings of self worth through dance. Youth in Ailey Camp were giving feedback and creating choreography, so I was reporting on that. At one point, I sent in an application about the program with some proposals about changes that could be made because I could tell, by the questions Perrin was asking, that what they were talking about was broader than what we were doing at Ailey Camp.

I met with Kelly, Sheila, and NS’s former Executive Director and we were told that Perrin was interested in talking with us about our teen program – Conservatory. They said, “We’re interested in youth voice and seeing how that can be incorporated into your work.”

Kelly said, “I see where you’re coming from.” and mentioned that Perrin was going to start having workshops to help us take this journey with them.

CSM: What workshops did you find most impactful?

FD: I went to Nuts and Bolts of Moving from Community Service to Youth Led Social Change. After that, I said, “Ok, I get this now, let me take a step back”.

We had stayed in touch with graduates – many of who have gone on to be successful professionals in the arts and other fields. The next generation of youth were going to college, but the students were faltering, transferring from four year institutions to two year institutions, and even dropping out all together.

We decided that we needed to give youth more of an opportunity to be leaders. We started encouraging youth to take risks, lead choreography, manage the band – really shape and impact the work.

It was a bit of a struggle at first, but they started to get into it. We saw their performance improve and youth going to four-year colleges weren’t coming back as much.

It’s hard to really evaluate this, but we felt that it was, in part, the result of increasing youth impact and voice and giving youth access to real leadership opportunities. We are teaching young people to make decisions, make mistakes, learn from them and make changes. They’re learning from experience.

CSM: What changed for you in your thinking about all of this?

FD: I started to really understand why Perrin wanted to do this. The foundation wanted to engage youth and get them interested in making changes in their community. So their drive and ambition could stay local – to fight brain and talent drain.

CSM: How did you implement what you learned?

FD: It was challenging to figure out what to do next.

We decided that the best way to do the work is to replicate the trainings with staff and teachers. To the best of our ability, we took what we learned in the three-day workshop and shared it with our team. The process brought us together because we shared our experiences.

We started incorporating what we learned into the leadership workshops we do with youth. It’s incorporated into orientation and twice per week workshops during the summer program and also on a monthly basis during the school year. We have open conversations about the issues that are important to the youth and the root causes of those issues. We talk about power, oppression, and the root causes of issues that matter to our students.

More kids than we expected had strong opinions and wanted to talk about these issues. Sometimes, it was difficult to have these conversations in an open arena, but it fostered a strong sense of community among the group.

We also started offering opportunities for youth to have a more active role in designing the program. Some of that work had already begun, but I never heard anyone talk about youth having honest to God leadership roles until I heard it from Perrin. When we had those conversations, we thought, “this is a leap, but it was also a natural progression for us. We didn’t necessarily see where we are now as an end goal, but we’re really happy we did this. “ One young person told us, “What we like about Neighborhood Studios, is that you’re tough and we have fun, but you actually listen to us and respond to us.”

CSM: How has your participation in Forum Theater workshops impacted your work?

[Forum Theater is a theatric tool to interactively investigate situations in which people’s rights have been denied.]

FD: That was our first time being exposed to Forum Theater. Our theater teacher, Rasheem Brown, our summer artistic director Luisa Guzman, and three NS students came with me.

We didn’t have a theater program within conservatory during that time, but after that workshop, Luisa said, “we’re going to do Forum Theater this summer.” We were terrified that we wouldn’t be able to pull it off, but we did a workshop with Megan [Fountain] and all the students got to come and participate. They actually did their own skits. It wasn’t just the theater kids – they all got a chance to make their own skits.

It really fostered a sense of group unity that we’d never seen before. This was the first summer that you could really see cohesion. The students were totally supportive of each other because they’d had so many opportunities to interact.

CSM: You also participated in an Undoing Racism training through the People’s Institute for Survival and Beyond. How has that impacted your work?

FD: The biggest immediate impact is that I’m trying to make a much more concerted effort to involve parents in what we do. We’re planning to get some parents on board to help co-facilitate a parent group.

That was the big thing. How can you do work in the community when you don’t have people who represent the community involved in making decisions? Most of our faculty and staff actually lives in this community or similar ones, but it’s important for the parents of the kids we’re working with to have a say in the program. It’s important to have an authentic parent community that makes decisions and has a real impact.

The other thing is personal. It really forced me to think about my heritage and multiracial background and the work that we’re doing. It got me thinking about the importance of the heritage backgrounds of our faculty and the kids we’re working with.

It was overwhelming and emotional and taking that back to our faculty – I think its something that we need to keep talking about.

I’m really fortunate to have a diverse staff and we still need to have that conversation.

CSM: What has been challenging about the shift?

FD: Sometimes it’s challenging to get the youth to sign on for the work. Some of the youth really just come to dance and sing, and putting that in the context of an issue isn’t as engaging for them. They haven’t always had opportunities to talk about the issues that are important to them.

Sometimes it’s a challenge for the staff. It’s easier to just have a dance class than to talk about what this means to youth.

As we have more successes they become more and more involved. As we get together more often, they have things they want to see in the world and they find it easier to talk about how to make those things happen.

CSM: How has your board responded to these changes?

FD: I’m fortunate that our board is really supportive of the work that we do. Many people on our board remember times when people took a stand for what they believed in, it’s exciting to them to see that happening with youth. Now it’s less about just providing a service, it’s about engaging a new generation in this work that we’re all invested in. They think to themselves, “Now I see there will be more people coming up after me who can do this work”.

CSM: Has anything surprised you about this work?

FD: It’s really surprising what comes out once you open the door. You’d be surprised who speaks up.

One young woman we work with was really quiet. She once said to me, “I’m not really a good student.” Aaron Jafferis [a local hip-hop poet and playwright] came to work with the young people and this same young woman wrote one of the strongest pieces in the group. I gave it to her mother and I shared it with Perrin. I said, “she can write, she has a voice!”

CSM: What would you say to EDs who are beginning this kind of work?

FD: First, get to know your faculty and the teens you’re working with. Figure out where they’re at.

If there are workshops available, absolutely go. Don’t just send staff. Absolutely, go yourself. If you can’t do three days, do a one-day workshop to understand what the work is about.

Have a point person who can head up the work. For me it’s Luisa. When the person is bringing what they are learning back to the faculty, be a part of that training so you really understand what’s going on.

And listen to what the youth have to say.

This work is going to open up all of new avenues. You may not have realized that youth could see this kind of potential in themselves – that they can be leaders and have a voice.

To learn more about the importance of youth voice, check out our website. To learn about PFF workshops and trainings join our mailing list or reach out to Camelle Scott-Mujahid.