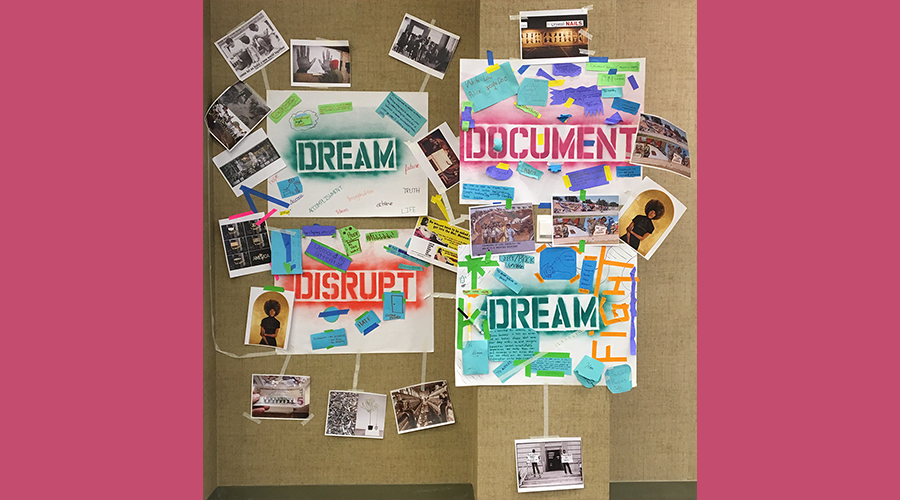 Young people explore the arts as a tool for social change 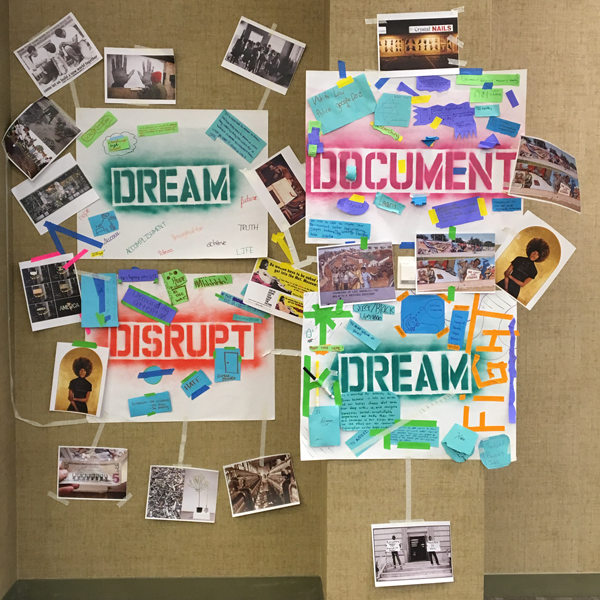 PFF has been deeply moved by the many ways that our arts based grantee partners have incorporated youth voice into the creation of brilliant performance and visual arts pieces.  We have similarly been impressed by the way youth led social change grantees have incorporated the arts into meetings, workshops, and public actions.  In celebration of this, the foundation hosted an Arts and Social Change Workshop for all of our grantee partners at Housatonic Community College on March 31st, 2016.

Nearly one hundred young people and their adult mentors participated in an interactive workshop led by co-facilitators Tess Korobkin, a teaching fellow at the Whitney Museum and a Ph.D. Candidate in Art History at Yale, and Karla Robinson, and arts educator with a special education license and more than 10 years of experience as a teaching artist and youth development professional.  Through the event, PFF hoped to provide space for young people to learn about how artists have engaged with social change movements throughout history, to think of ways they can continue to use the arts as a tool for social change in their own work, and to build stronger relationships between our grantee partners across the state.

“It is essential for activist to document because a historical record is vital to strategic planning” #CTart4change pic.twitter.com/jCWs5fh2XL

Dream – Presenting a vision for a better word

Youth worked together to examine these strategies and apply them to artwork in a portfolio, which spanned several decades, dealt with a range of issues, and reflected an array of experiences and identities. The culmination of the workshop was the creation of large art displays using tape and markers connecting art from the portfolios to one or more strategies from the Document-Dream-Disrupt Framework. The group showed off their creativity and thoughtfulness as they connected these pieces with circles and hearts acknowledging the way in which all three strategies can be found in many works of political art.

As the workshop drew to a close, the floor was given to Masters of Ceremony Shineika Fareus of Hearing Youth Voices (HYV) and Naomi Jones of Writer’s Block, Ink. (WB) who led the youth performance section of the evening and Twylah Greaves of HYV who joined Naomi in telling the story of how their two organizations have collaborated in recent years. Writer’s Block is an organization working with young people to write, produce, and perform theatrical works and poetry based on their own experiences, using art as a means to learn about root causes of issues that affect youth in New London. Hearing Youth Voices is a youth led organization, employing community organizing strategies to address issues affecting young people in New London.

Last year, Hearing Youth Voices organized a “Black is Not A Crime” rally and invited spoken word artists from Writer’s Block to perform during the event. Both young women agreed that the result was powerful for young people in their organizations. “Writer’s Block’s performance added an emotional component to the action.” Twylah said, “It was more than entertaining. It connected to what we were doing and it was beautiful and deep.” Naomi agreed, saying “There was a huge impact afterwards. Students at Writer’s Block were really touched by HYV’s action. They wanted to use it as part of Writer’s Block’s play that year.”

Following that amazing story, three young spoken word artists and two theater ensembles shared performances touching on a range of themes including identity, the media, history, and police killings of black people in the United States.

At the close of the event, as Beyoncé’s latest single played in the background, young people hugged, laughed, danced, and posed for selfies finally “getting in #Formation” for a group photo.

We are so grateful to our co-facilitators, MC’s, storytellers, and performers for making this this event such a success. And to all the young people and adult mentors who brought their amazing energy and creativity into the space. For more photos and videos of the event check out #CTArt4Change on Twitter and Instagram.