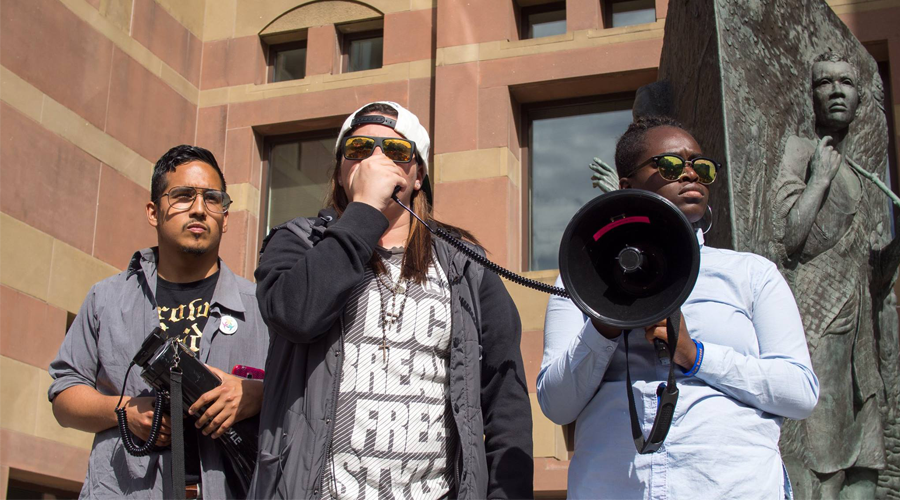 Over the past few years, events across the country have forced our nation to confront some of the ugliest pieces of our history and to acknowledge the ongoing existence of systems of oppression and exclusion. In the midst of extreme turmoil and violence (state sanctioned and beyond), young people are standing up, taking action, and leading the charge to support, care for, and organize their communities.  Across our state, young people are creating safe spaces for community healing, facilitating community dialogues, organizing protests and vigils, and even taking their efforts directly to the Democratic and Republican National Conventions.

On June 23rd, the Supreme Court upheld a Texas appeals court injunction blocking implementation of Deferred Action for Parents of Americans and Lawful Permanent Residents (commonly known as DAPA).  DAPA would have allowed some undocumented parents of children born in the US to secure legal employment status and deferred action on immigration proceedings for three years.  This decision has been met with outrage and widespread protest from immigrants rights groups in Connecticut and across the Country. 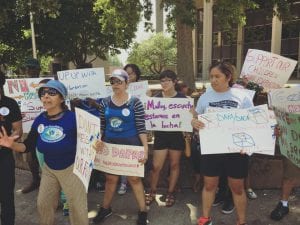 PFF grantee partners CT Students for a Dream (C4D) and Make the Road CT united with allies in protest in front of the Immigrations and Customs Enforcement Office in Hartford.  The action was a collaboration between Connecticut Immigrant Rights Alliance, Unidad Latina en Acción, Junta for Progressive Action, ACLU CT, and United Action CT.  Thirty protesters blocked the street in a planned act of civil disobedience and nine were ultimately arrested.  You can read more about the protest here.

As part of their work with United We Dream, C4D youth leaders also took the fight to Cleveland and Philadelphia for the Republican and Democratic National Conventions. Protesting in the streets, young people came together from all over the country, challenging the rhetoric and platforms of presidential nominees and bringing further national attention to their cause.  You can read more about those actions here.

On July 12, forty-nine members of the LGBTQ+ community (the majority of whom were also members of Orlando’s Latinx community) were killed in a mass shooting at Pulse Nightclub in Orlando Florida.  The massacre, which also wounded 53 people, was the deadliest single attack on LGBTQ+ people in US history.

LGBTQ+ Youth Kickback responded to the attack by organizing a speak out and rally in front of the Amistad memorial at New Haven City Hall.  Event organizers held space for people who were feeling the impact of the attacks to speak about their fears, frustrations, hopes for the future.  Through their grief, the crowd comforted, and affirmed one another.  In the midst of their own grief, the young leaders of LGBTQ+ Youth Kickback held space for their community standing up against hate and demonstrating the power of youth leadership. For more information about the event see coverage by the New Haven Independent and the New Haven Register. 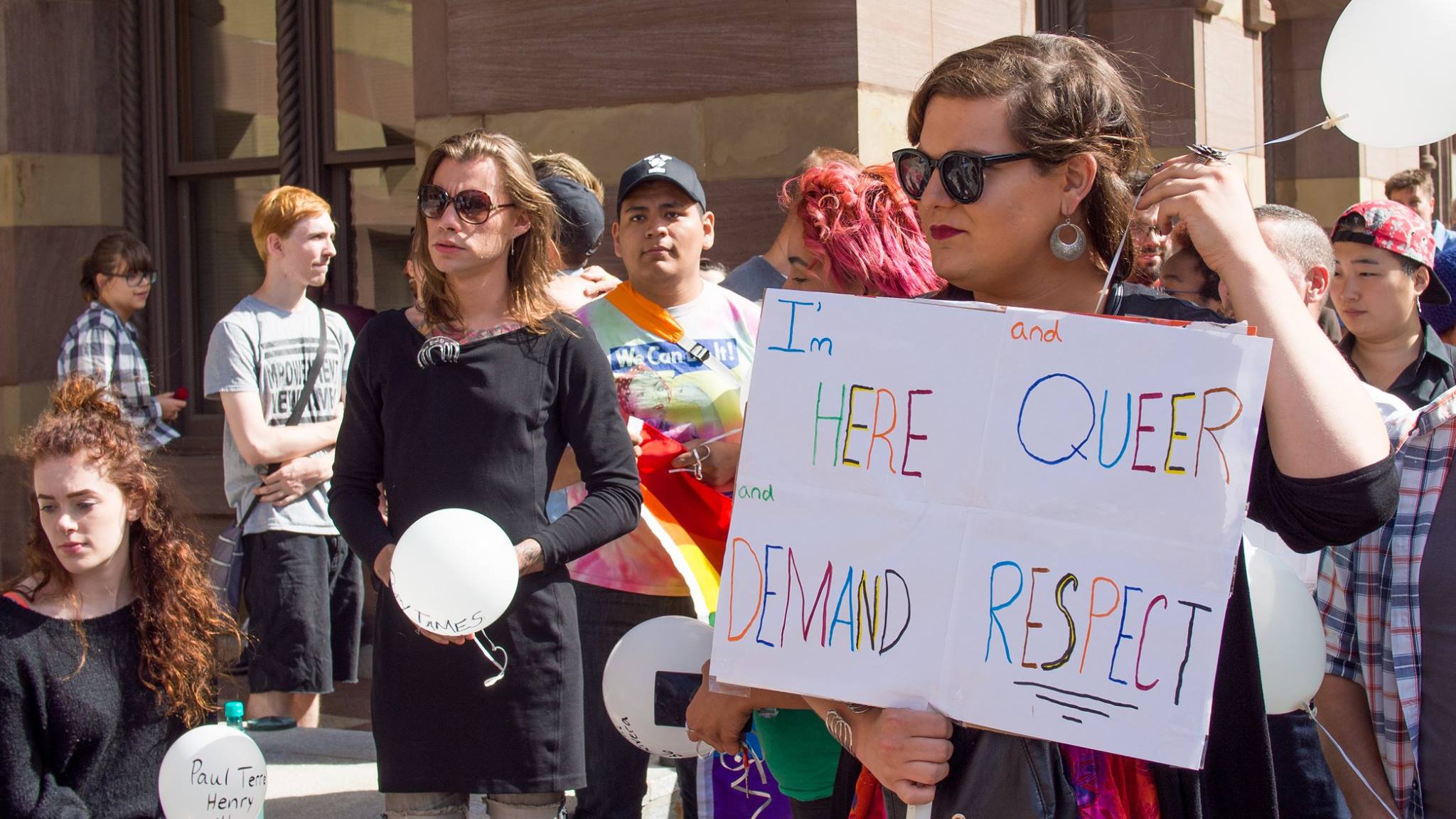 The week of July 4th 2016 will live on in the minds and hearts of many as one of the most devastating weeks in recent memory.  On July 5th, Alton Sterling was executed at close range by police while held down on the ground.  A graphic video of the encounter quickly went viral and was followed the next day by a Facebook Live video of the dying moments of Philando Castile.  The video reignited protest and outrage that has been ongoing since the death of Trayvon Martin in 2012.  Just one day later, a gunman opened fire on a Black Lives Matter protest in Dallas, TX, injuring nine people and claiming the lives of five police officers.  Protests sprung up across the country throughout the following weekend as thousands took to the streets to assert the value of black lives and call for an end to state sanctioned violence against black communities.

Youth leaders from New Haven’s Citywide Youth Coalition (CWYC) have responded to these recent events through their Dinner and Dialogue series.  The group, led by members of Citywide’s Youth Advisory Board, gather together on the second and fourth Thursday of every month discussing topics ranging from privilege to how to handle involuntary interactions with police.  In addition to organizing and leading these gatherings, youth leaders are organizing in support of one of their peers Aymir Holland who was arrested for his alleged involvement in a November 2015 attack on a Yale College professor.

Though (at 17 years old) he is the youngest of the four suspects in the case, Aymir is currently being tried as an adult and faces up to 61 years in prison.  One of the key goals of that effort is to have Aymir’s case moved back to juvenile court.  So far, the group has succeeded in securing private council at no cost to Aymir’s family and garnered vital media attention and community support for their cause.  You can learn more about CWYC’s Dinner and Dialogue series by visiting CWYC’s Facebook page and you can read about youth leader’s support for Aymir here. 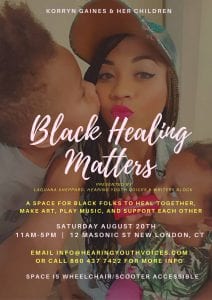 As young people grappled with the impact of these incidents on themselves, their communities, and their families, youth leaders at Hearing Youth Voices and Writer’s Block, Ink. joined forces with community member Laquana Sheppard to organize a space for the black community to join together for “healing, art, music, and support” under the name Black Healing Matters.  “Though the deaths of Alton Sterling and Philando Castile were the catalyst for this space, we spent time honoring and centering black women, femme, and gender non-conforming folks.” said Hearing Youth Voices organizer, chelsea cleveland, “Representatives from Uplifting a Life came through from Waterbury and were awesome participants.”

Meanwhile, young leaders at Creative Youth Productions in Bridgeport poured their feelings into Black Lives Matter, a short, but incredibly poignant film.  In just over a minute, the piece connects historic violence against black communities to the violence and injustice we see today using music, sound effects, and gripping visuals of young men running for their lives.  CYP youth leaders posted the video to YouTube stating, “Now is the time for change. This is my way of sending a message to end police brutality on black lives.”

The Perrin Family Foundation stands with young people in these turbulent times. We are immensely proud to see youth leaders standing up for their communities.