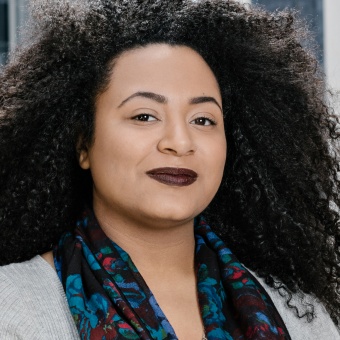 Though youth have historically been both the catalysts and centers for transformative social change in America, organizing work is not always led or funded with this in mind. Partnerships with caring, supportive adults and the opportunity to put learned skills to the test can build a young person’s confidence when it comes to confronting systems of oppression and just being themselves. Additionally, pipelines of leadership ensure that young people grow from members to organizational leaders, passing on generational knowledge and transforming communities over time.

In the five years since PFF released its field scan, we have seen tremendous growth in the youth-led social change landscape, with efforts being led by a new generation of young organizers of color.

One such youth organizer is Yanitza Cubilette from Hearing Youth Voices (HYV), “a youth-led social justice organization, working to create systemic change in the education system in New London”. With her own roots in the local community, Yanitza began participating in and being organized by the very group that she now helps lead.  This past spring, Yanitza was one of seven young adult leaders awarded a Soros Justice Youth Activist Fellowship to create the Black and Brown Student Union (BBSU) here in Connecticut. We talked with Yanitza to learn more about the origins of her social justice work, her plans to transform the landscape of youth organizing statewide, and what drives the work she does each day.

MM: How did you get your start in social justice work?
YC: My experience from living in the Dominican Republic and getting held back because no one wanted to translate my transcript – realizing that I lost a year because of that, it was really demotivating. I met Laura Burfoot, and she was just very validating and invited me to be part of a project for the summer of 2012. It was the YPAR (Youth-led Participatory Action Research) project – we went out into the community and I found out I wasn’t the only one who didn’t have to do an extra year of schooling because of that.

I met Laura doing community service after school, and talking to her, she was one of the few adults, especially in an institution who said, “Hey, you can do something about that, let’s do something about that”. When she asked me to join her, I was like, “I don’t even know what this is about, but I’m in!” And I started building connections with other folks at HYV, like chelsea and Erick, my community really. I was able to identify New London as my community; otherwise I think I would’ve dipped already, or left in a more formal way.

For a long while at HYV I had to volunteer – I was brought on through the youth employment program and we didn’t have the funding to hire me. It was not until I had the opportunity to go to SOUL’s (School of Unity and Liberation) National Youth Organization Training Institute (NYOTI) – going there and meeting other folks my age and organizing in the Oakland style – they have that whole culture out there – I was like, “This is what I want to do!” Pretty much everyone around me remembers how excited, and how on-fire I was at the airport. Just being there, a fire was lit in me, and it was a wrap. The summer introduced me to it [youth organizing], but that experience cemented it.

MM: What has your experience in HYV been like? How has it shaped you?
YC: HYV has a very unique culture – it’s like a culture of family. We’re in a transitional period right now, a bunch of our core youth have graduated and gone on to college, and we’re working with our new youth interns, and it’s great seeing them able to talk and bond about their issues in a safe space. Talking and learning how to build and fix the things that we’re so mad about. It’s unique to HYV – other organizations are great, but what we have here is just our thing, it’s unique. 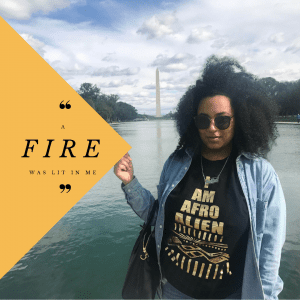 I try to, [build those spaces], I definitely try to – that’s always the goal to bring the HYV flavor and style everywhere. The culture – allowing me to be the individual I am while valuing the skills I have to bring – I bring that to all of those different spaces. For example, I used to think I had to pull my hair back in a bun to look “professional”, but now I get to just be myself, I get to wear any regular “Yanitza” outfit.

If I’m comfortable in the office I can do the work. I get to just be myself, and that’s so important when the youth come into that space, it’s important that they get to see me as an adult fulfilling this role and still being true to who I am.

MM: Can you tell us about how the idea for Black and Brown Student Union (BBSU) originated?
YC: It was the last day for closing out our grant period as a BLOC cohort, and we had the opportunity to just get really real, and all of the youth in the space, agreed “This is what we need, a black and brown student union” – it was based on the idea that we all had had a chance to come together, chill, network, and do youth organizing work. They were thinking about that space, at the barn in the Wisdom House – and I tied that experience to mine at SOUL – the culture of organizing, and feeling the electricity in the air, and I just thought “I wish all these people lived close to me so we could do something together”. And thinking about that I was like, maybe this is what the youth are asking for? And that’s what this fellowship offered for me, the chance to make that happen. Obviously, I was supported a lot through this process, but it was really the chance to ask for what the youth asked for and also what I wanted back then.

MM: What needs do you believe exist within the field of youth organizing in CT and how do you see the BBSU addressing them beyond the 18 months of the fellowship?
YC: Hopefully it’s gonna be filling a gap – it’s going to help us as organizations and organizers to come together because we don’t have all the resources to do the work at the pace that we’d like to. Especially outside of silos – there’s a lot of good stuff happening here, and I’ve been hearing more and more about it all with the networking I’ve been doing as a part of this project, so I’ve been like “Woah, there’s even more than I thought here” – once our youth are buddy-buddy and working together, then definitely our organizations have to come together too.

I for sure envision it addressing it a long-term vision, beyond the 18 months. For example, regarding funding issues the BBSU should definitely eventually embrace grassroots funding from our communities. In terms of organizing, I’d like it to seek more clearly the intersections within our work, so that solidarity is more possible. I’ll be more likely to show up for you if I’ve met and connected with you on another action. That’s a small step that we can take, showing up for other folks. It doesn’t always have to be more complicated things that take more time.

MM: Why is youth organizing a field you’re so passionate about?
YC: Honestly, because I know what my experience as a young person was like, and all the times in my life when I felt unheard – I could’ve given some dope advice even though I was 12! For example, now that I’m an adult, my mother can take me seriously – that’s how adults are conditioned. I had my grandfather who would listen to me, he gave me power: “If I’m wrong, call me out and we can talk about it” – that’s what Laura gave me when I was in my transition to New London High School, and I feel like that’s what every youth should have. They have a voice – “empowerment”? They already have power, it’s just that other people stomp on it. Ultimately, as youth we grow up and we become those gatekeepers, and if we become the right gatekeepers, there’s nothing we can’t change.

MM: What insights would you like to share with young people who might be inspired by your journey so far?
YC: To adults working with young people my advice is to not be afraid to let go of some of your power and trust the young people. And to a young person working in organizing: it can be so hard emotionally, so always make time for community and love and self because when the fire is lit it’s hard to turn it off, but we can’t forget to feed it. You have to love yourself a lot in this process. It’s also a very lonely process when you’re the only one in your family or of your friends who get it – It’s important to build community as part of that process.

I also want to mention all of the support and mentorship I’ve gotten through this process – I definitely wouldn’t have gotten through this alone, if it wasn’t for those adults being smart gatekeepers and giving up some of that power, and it’s important to note that too. It’s not just Yanitza who was a super-youth who had a super-voice, I had super-adults who opened the door for me and were like, “Here you go, go!”